Filter products
30 items sort by:
Your selection:
delete all filters 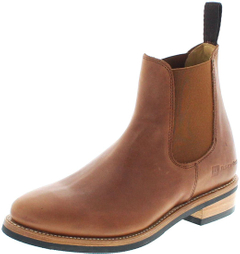 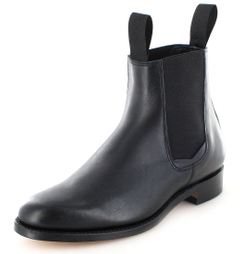 What have Queen Victoria, the Beatles, Stormtroopers and well-dressed individuals got in common?

A timeless pair – With Chelsea Boots through history

The Chelsea Boot was invented in 1830 by J.S. Hall, none other than Queen Victoria’s shoemaker of Queen Victoria, invented. He had originally designed the shoe for ladies and for men as a classic running shoe. Other sources argue that the shoe was initially intended as a riding boot and only later became a running shoe. It is the typical question of the chicken or the egg. It makes no sense at this point to discuss who was there first. One thing is certain, the Chelsea boot goes back a long way.

However, it has not had its name so long. Some evidence suggests that the shapely ankle boot was known by the name "paddock boot" a long time ago. Be that as it may - until the First World War, the shoe remained a common feature of countless shoe cupboards. After that, it kept more of a low profile, until in the mid-1950s a group of prominent young artists, film directors, fashion icons and socialists from West London started to make the ankle boot socially acceptable again. Back then, the media called the group "The Chelsea Set". The term "Chelsea" was to become a synonym for the movement and for a new way of thinking and, ultimately, for a new form of self-expression, using clothing. That is how the Chelsea boot got its name.

After that, the wild journey continued - they immersed themselves in the world of Rock & Roll, were favoured by the Beatles and the Rolling Stones, were hallmarks of an English sub-culture called Mods (Eng: "modernist"), made an appearance in the 1960s TV series "Avengers" and were even worn in the 70s in the movie "Star Wars" in a futuristic white version, by the Stormtroopers. The Chelsea Boots still enjoy great popularity today. Probably because of their straight and classic look that can be worn both casually and elegantly. The Chelsea boot is therefore a truly timeless companion and always a good investment in your look.

The Chelsea boot – One boot, a host of styling possibilities

The sleek silhouette of the Chelsea Boot is extremely versatile and looks super both with the classic look, with a suit, as well as casual, with jeans. Without much effort, you can create a trendy look with the Chelsea Boot and how far you go, is up to you. Here are a few styling tips from our site:

The small black one – Chelsea Boots in Black and Grey
You actually can’t go wrong with black Chelsea boots. Especially for "beginners", these are the first choice, because you can combine the black Chelsea boots either with a suit or with casual outfits with jeans or chinos. Chelsea boots in gray, however, although they are located in the same colour range as the blacks are a tougher nut to crack, in terms of styling variations. Despite that or perhaps because of that, they are worth putting on.

Chelsea Boots in Brown
The brown variant is similar to the black Chelsea boots. With them too, you will be very safe from a styling point of view. If you want to spice up the look of the Chelsea boots in brown, you can go for a model with colourful elastic inserts.

Your shopping basket is empty

There are still no items in the shopping basket.